The Kinshasa Press Review of this Wednesday January 5, 2022 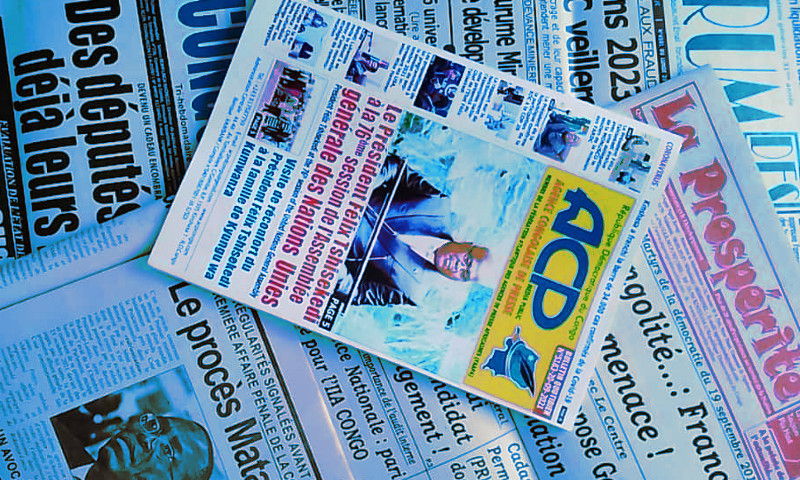 DIEGO YESAYA
Kinshasa05-01-2022Press review - Difficult academic reopening this Wednesday January 5, hypothetical holding of the Plays of Francophonie in Kinshasa, two subjects which fed the newspapers published this day in the congolese capital.

"ESU: the teachers threaten to boycott the academic reopening ", Forum Des As mentions. Deploring the modicity of their wages and the recent nominations within the boards of management of their establishments, the professors and the scientific personnel of the universities and public higher institutes start the strike as of the opening of the academic year this Wednesday January 5, this daily newspaper reveals. According to a correspondence of the ministry in charge of the Higher education and university (ESU), the official ceremony of the opening of the academic year is confirmed for this Wednesday morning at Academie de Beaux-arts. In the places of the teachers however, calls to the strike, the boycott… predict disturbances in the resumption of the courses, the newspaper reported.

In the tread of this reopening, the Network of associations of the professors of the educational higher establishments and university (RAPUCO) announces a dry strike as from this Wednesday December 5, 2021, in all the universities and public higher institutes, LE PHARE announces. RAPUCO notes with bitterness the bad manifest faith of the government of the Republic which continues to maintain the professors under living and working conditions of precariousness without similar, still reveals le PHARE.

However, Africa News supplements, the Network remains open to any exchange likely to bring concrete answers to the legitimate claims of the professors. Coming to a conclusion about the recent nominations within the universities and higher institutes of the country, the RAPUCO also noted that these nominations do not represent the principles of promotion establish by the legal and lawful texts since they are characterized by movements of the personnel likely to compromise social peace.

On its side, Congo Nouveau, concentrates on the hypothetical organization of the Plays of Francophonie and denounces impunity at the top of the State.

At eight month of the holding of 9th plays of Francophonie, all is as in starting point, the newspaper notes. One needs a miracle to see Kinshasa welcoming this great cultural and sporting appointment of French-speaking world. The interview of the director of the national committee of 9th plays of Francophonie (CNJF), Isidore Kwandja Ngembo, granted to ACTUALITE.CD, is not of the kind to reassure the opinion as well national as international. The truths of that which took the place Didier Tshiyoyo, High Representing of the Head of the State to these Plays, at the head of the Steering Committee, are revolting, the tabloid mentions.

"One found a disastrous situation. Work was practically stopped. All work should have been started again. It was done that there was a certain number of contracts which were signed, which had not observed the procedure. Thus, the government had decided to set up a commission to inquire into all that. And the commission did its work and made a certain number of proposals. And on the basis of these proposals, it was decided to re-examine all the contracts which were signed previously ", Isidore declared.

Kwandja Ngembo which speaks clearly about the "inflated amounts", the newspaper adds.

In front of this scandal noted by a governmental commission, which humiliates the nation and seriously mortgages the chances of organization of these Plays, nobody is curiously pursued by justice. From where "impunity at the top of the State", Congo Nouveau mentioned