The Kinshasa Press Review of this Monday September 27, 2021 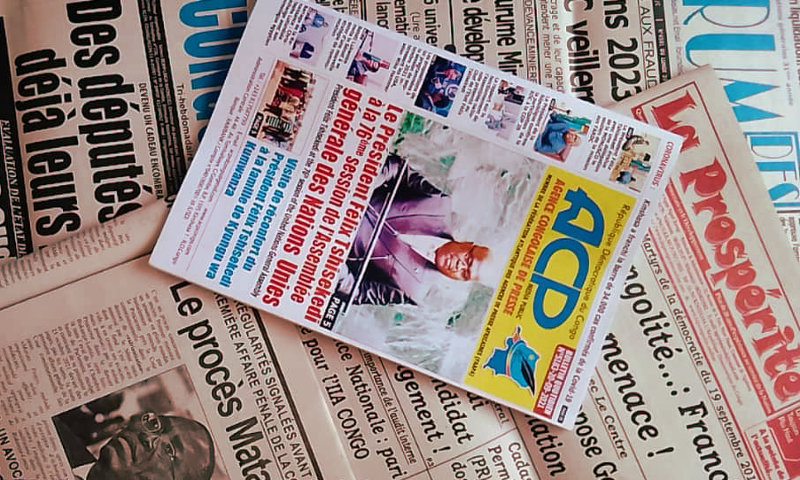 DIEGO YESAYA
Kinshasa27-09-2021Press review - The talks of Felix Tshisekedi on VOA about the Tshiani law as well as the nomination of CENI chairman by the religious confessions constitute the main topics used by the newspapers appeared in Kinshasa.

"Tshiani released in full flight", AFRICANEWS mentions. This tabloid reports that from the United States, President Tshisekedi also decides against the congolité. "They have had Congolese, was born there from father and of congolese mother who took part in the ruin of these countries", pointed out Felix Tshisekedi via the Voice of America-VOA from the United States where he attended 76th General meeting of the United Nations.

For this newspaper, the exit of Felix Tshisekedi on VOA is an unambiguous message. Noël Tshiani, initiator of the law on the “congolité” is released in full flight, even if, of the opinion of the Head of State, he is Congolese and it is in his law to propose this law.

But for TEMPETE DE TROPIQQUE, Felix Tshisekedi is very badly understood. The colleague makes another reading about the Head of State’s talk. "He did not want to deliver his opinion on this subject with polemic, especially which mischievously diverted the attention of several Congolese while showing in confusion “Congolité” which is not in any case of season in realities of the DRC", this newspaper reveals.

And to continue, "for Felix-Antoine Tshisekedi, it is also that the democracy and the State of right, one cannot forbid a whole nation the power to reflect within the legislative institutions".

Compared to the nomination of candidate delegated to CENI on behalf of the religious Confessions, the President of the DRC refuses to involve himself in a file between the hands of the National Assembly, obliged to assume itself compared to the evolution of the situation.

Under title "ECC and CENCO recalled to the order", L’AVENIR notes that everyone waited for his implication in the process of designation of the organizers of the CENI. This time, Tshisekedi remained in his standing "of the sphinx’s son".

Malonda jurisprudence was used for nothing. The guarantor of the nation remained in the medium of the village. No injunctions to give, but to Mboso to question the plenary sovereign. If so, the train continues its road; and if not, the monks will have to continue the discussions.

Thus "the referee decided". No special meeting to grant to a minority fringe religious confessions.

In the same register, LA PROSPERITE stresses that in front of the congolese journalist of the Voice of America, the Head of State of DRC, Felix Tshisekedi, answering the question about the delay noted in the nomination of CENI chairman straightforwardly returned the ball to the religious confessions and the National Assembly to complete this mission whose materialization would be a major step for the organization of the elections in 2023. "It is not a political business, I still repeat it, it is a religious business. Therefore, it is not my business… ", Felix Tshisekedi explained.

The Congolese News Agency (ACP), reports that the USA are satisfied of the actions carried out by President Felix Tshisekedi since his advent in the reinforcement of the relations in the Great Lake areas.

Antony Blinken, American Secretary of State who were received in the presence of the Deputy Prime Minister, Foreign Minister, Christophe Lutundula, greeted the leadership of Felix Tshisekedi as a president of the African Union and his determination to put an end to the illicit traffic of natural resources by the armed groups in the under-area before exchanging around other subjects relating to the African continent.